Notes on early days of Clipper

Clipper was originally built in 1985 as a compiler for dBASE III.

Clipper was built by Nantucket Corporation led by Barry ReBell (management) and Brian Russell (technical), and  later sold to …

Main architects and primary developers of Clipper and founders of Nantucket Corporation. It was 1984 when
Clipper was born. 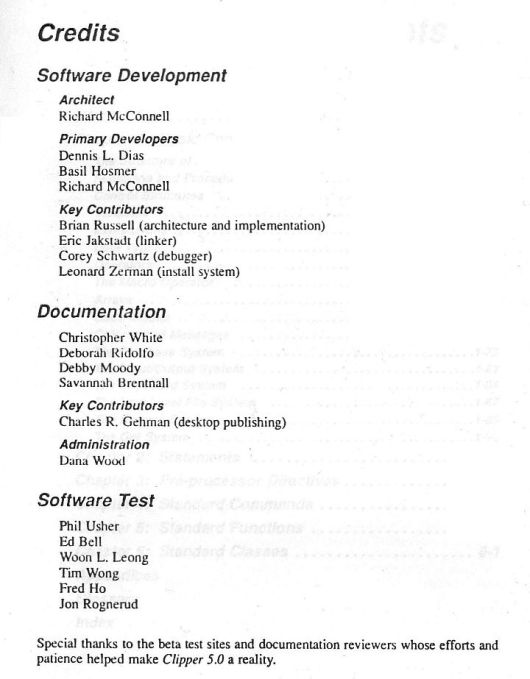 … and 30 years after birth of this phenomenal myth, one (or first) of main builders suddenly appeared : Brett Oliver !

By a comment to one page of this blog :

Not only main starter / builder of Clipper, he is also author of wonderful books :

This book also is a myth.

And he told me on request, something on beginning and building story of this great myth;

Brian was working at Ashton-Tate, as was I.

I was in tech support, alongside Brian, and customers that were phoning in kept asking for a compiler.

So I approached Barry for the money to back it. He had a temp agency. I met him in the Ashton-Tate cafeteria.

I recruited Brian at lunch at a Japanese restaurant in Culver city.

Clipper was the first program Brian had written in ‘C’.

He learned C as he programmed Clipper.

I asked him when I was recruiting him if he had ever written a compiler.

He said he had written a Pascal compiler in university. (He later admitted that it had never worked!).

The first development office was a beach house in Malibu.

Tom Rettig was the editor for dNEWS at Ashton-Tate. I took over as editor of dNEWS.

I was the first VP of sales, and one of my employees was Mary Beth. I introduced her to Brian and later they married.

At the first Comdex in Vegas, Brian was upstairs in his room – coding.

He got one command to work – paint a dot on the screen. We demonstrated that one command, and showed that we could draw a box 20 times faster than dBASE.

I wrote a couple of books on Clipper, and was also on the dBASE for Windows development team at Borland.

I worked with Tom at his condo in Santa Monica for a time. Too bad he died.

Brian and I went dirt biking together. He loaned me his street bike for a couple of months when my car was getting fixed. He is a good guy. I think he is working in LA.

We live in San Diego, – my wife is from Liechtenstein. We have three boys.

I am Scottish. Currently programming in eCommerce.

I wish he will write more …

One response to “Early days of Clipper”

This site uses Akismet to reduce spam. Learn how your comment data is processed.