Q: How I can protect my tables ( .dbf files ) against to open with any other Program (like Excel, access) ?

A: There is too many method to solve this problem. Sadly non of its has warranty, always there is a solution to open any file by experienced users. You can ask Google.

Against non experienced users one method will be changing file extensions ( .dbf ). In this case you need modify your programs to change “file name” ( open dbf ) parameter  in USE statements (USE commands or DBUSEAREA() functions).

How I have joined HMG Family – A Story

I was a commerce student, studying in a 100+ years old school in my home town Sivakasi (famous for fireworks ), Tamilnadu, Southern part of India. I was studying +2 (12th and final year in school). Once, the exams were over, it was time to join a College. Not to waste the exam holidays, one of my friends had asked me to accompany him for a part time computer course in a near by Polytechnic College. I told him, “Ok”. We joined that course which was for six months, conducted on Saturdays and Sundays. I studied some basics about computers and languages like BASIC, Pascal, COBOL and an introduction to Lotus 1-2-3, Wordstar and dBase III Plus.

After that I had joined a college and my main subject was Commerce. After finishing my Under Graduation degree in the year 1993, I had joined Chartered Accountancy Course. And, once I had finished this course in the year 1996, I joined my brother to manage our family business.

Even though there was a computer in our office, I was not allowed to touch that.  The reason was, at that time, computers (AT 386) were costlier and one cannot take the risk of losing precious data and computers were operated only by computer professionals.

In the year 1997, I had purchased a computer on my own, and started implementing something which I had studied some seven years back.

I had studied under the DOS environment and I had got Windows ’95 in my new system as my operating environment. Even though it was easy to operate, I could not do any programming. I had so much of works before hand and I was involved in them for about 1 year. It was a Costing project in Excel with about 150 sheets, everything interlinked. It was a nice experience. I had done some macro programming in Excel for introducing thousand’s comma according to Indian tradition.

In the year 1998, the computer professional who had programmed for the accounting, invoice processing and payroll processing for our business firm had gone for a better job. We could not create new reports according to the requirements and we had to play only with the old options. Only at that time, I had realized about the importance of Database programming. Having the knowledge of DBase III+ programming, I had started to write small utilities to take self configured reports from the existing tables. I had the reference of the source codes for the existing software. It was done in Clipper Summer ’87 version.

There is a saying, ‘Necessity is the mother of invention’. Yes. Necessity had driven me to do more and more programming. Actually, I had started staring huge prg files with various do while .not. eof() loops and virtually indefinite nested if … endif conditions. Once understood, I had the confidence of creating bigger software too. So, in addition to the accounting software, I had created order processing and inventory maintenance and integrated the same with the existing project.

It was in the mid, 1998, I could get an internet connection with a dial up modem. In the mean time, I had a dream of using GUI in my programming. I had tried Visual Basic. I could not link with my existing dbf tables and dropped. In the beginning, I misunderstood about OOPS and GUI. Actually I had an allergy over this OOPS, I don’t know why even now.  So, I had abandoned my dream  of GUI because of OOPS.

In the year 1999, while searching the net, I had come across a site called Oasis, a site which had shared source code/libraries for Clipper and many utilities. From that site, I had got an excellent library called Super. It had some assembly language routines too to capture mouse gestures and enabled Clipper code to be ‘RAT’ified. Apart from this mouse functionality, the library had so many small utilities like sorting multiple arrays, finding out Day of the week like that. Actually I had realized about the advantages of Open Source on seeing that library source codes. I had studied in depth, and I had known about optimization of codes, effective memory management, different routes to a same destination in programming etc.

With the SuperLib, I had changed all my projects to be mouse enabled, there by satisfying half of my dreams. However, I could not stop dreaming about creating a full fledged Windows program eliminating the dark DOS command box. As new versions of Windows came in the market, I was afraid that, one day there won’t be this DOS Command Box and all my programs would not be useful at all.

I was, why was? even now am, very fond of Open Source. In my system I don’t use any copyright protected software except the Windows Operating System. I would list all the open source software I use in a separate thread for all my requirements.

I had found out Harbour from the Oasis site I had already mentioned. I had tested a lot but could not use it because of SuperLib, as it could not be linked with Harbour.

I was in a confused state. I liked Harbour a lot because of its open nature. I could not abandon SuperLib too, since all of my projects were linked with this library. So, I was desperately searching for a GUI library (at least mouse enabled for Harbour).

On one fine day in my life, my search was fruitful.

I could even remember the date. It was 4th of October, 2002, I had downloaded Harbour MiniGUI and could create a window with my limited xBase programming knowledge. Hurray! I could not describe my feelings in words!

Immediately on compiling my hello world prg, I had commented in the yahoo group from where I had downloaded the 0.40 version of the library with the following words,

It is wonderful to use your Harbour Minigui Library, an open
source library for Harbour.

Thank you very much for your sincere efforts.

I would like to make a small suggestion regarding text boxes.

Shall you please make provision for right aligning the text boxes
for numeric fields?

Thank you once again.

From that day, Harbour MiniGUI page was literally my home page.  I read all the messages from various users of the library. It helped me a lot to understand programming, inside out of the library, even about calling C API.

I had happily started to convert all of my projects to HMG. As the product matured, all my projects were fully converted to HMG and I had seen my dream come true.

Most of my programs are used in-house. However, I had created software for many of my friends. I had earned some money from my programs too. As you know, my income is not based on programming, since basically I am a Chartered Accountant and managing business.

I wish to list some of my major HMG projects,

There are many tiny projects too. I am not listing them to show my talents. It shows the simplicity of HMG and my craze on HMG.

It is my nature, to escape from any politics. I wish to be good for all. During July 2005, when Roberto had decided to move on MingW and introduced HMG, MiniGUI Extended product had also born. I didn’t tell a word about anything in the group. I believe in Karma and thought, “if this happens, this is also for the good”.

I had actively participated in the yahoo group up to April, 2006 and kept silence after that.

However, I used HMG in a full fledged manner and I liked MingW version as Roberto distributed them. This is mainly because of the single installation of the whole thing (ie., MiniGUI library + Harbour Compiler + C Compiler) and full utilization of Open Source Software.

All the software projects listed above where developed by me during the period from 2004 till now. I too had contributed some parts like drawing pie graph, alternative syntax (with the valuable guidance of Roberto) (now Roberto had revamped in a better way!), Grid2Print which Roberto has accepted kindly.

Can you believe that this forum had been created in just 2 days time? On 29th of July 2008, I had asked Roberto, breaking my long silence, by an email about the need for a forum exclusively for HMG. Roberto also liked and generously accepted to guide and participate in the forum. On that day itself, I registered this domain hmgforum.com and installed PHPBB forum software and on 1st of August 2008, the forum was officially opened.

I am so HAPPY and PROUD to be part of the HMG family.

Thus, this story has a happy ending.

Courtesy of author, this article borrowed from here.

An unanswered wish of our maestro Roberto Lopez: 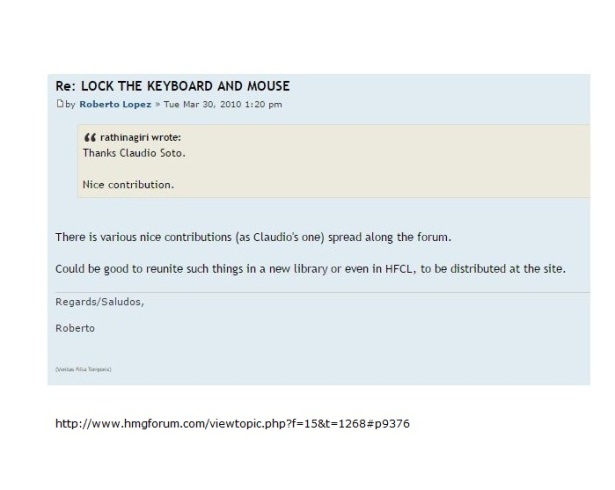 This and associated posts are incomplete ! …
more is hope…
to be continued …